Florence Kiwanuka and Mw Tom Mbyasse were my two hands, without whose dedicated services, it would have been an impossible task. Photo with the Katikkiro and Madam Florance at the end of Entoffeli for Kampala Central

Despite knowing about the Buganda Kingdom since my first arrival, at an age of 8 yrs, in February 1954 into Bwaise,  I knew very little about it and its Gombolola system. So, the challenge was real.

From my childhood, I was involved with Bagandas – so much so that I used to go and sleep with our servant’s family and play with his children. It continued more as I joined the Scouts movement in 1955 as a cub until I became a Rover Scout and a senior member of a Special Constabulary by 1962.

I, along with my other colleagues, was very fortunate to be given to guard the stage at Kalolo old airstrip on 9th October 1962 where presidents like Nkrumah, Jomo Kenyatta, Dr Banda and others join Dr Obote and the Kabaka to celebrate the birth of the new nation, Uganda.

So, to be given an opportunity to serve a new young king and a modern King, Muwenda Mutebi II, was a sheer pleasure.

The added bonus was my executive committee, miluka chiefs who were ever ready to perform in the name of Ssabasajja Kabaka. Moreover, I had a total support from my Ssaza Chief, Owek Patrick Luwaga Mugumbule (now the Speaker at the Lukiko), my minister of the local government, Owek Joseph Kawuki, our Katikkiro Owek Charles Mayiga and the King Himself. I was thoroughly touched when the King came to offer a birthday cake to me – a very modern king!

The King acknowledged me and my wife when we paid respect to Him during His Royal Visit to Ssaza Kyadondo and spoke very warmly to my son during one event. My son, Brij, was so impressed and said, “the King spoke to me in a simple ordinary manner with warmth”.

In Kampala, we served everyone equally as King’s people or King’s guests. In return, the love from people was overwhelming especially during events such as Entoffely.

The photos posted here tell only a small part of the story – me as a Gombolola Chief for the most important Gombolola, Masakkati (Kampala Central). Enjoy viewing the photos!

At the end of December 2015, Omuk Gosai, the Acting Gombolola Chief with its entire Executive Committee, Sub-Committee and the Miluka Chiefs (Heads of all Kampala regions) at the Kampala Central Gombolola Office wishing a happy 2016 to all!

I am very proud of my team that has tirelessly on various tasks often putting money from their own pockets. Simple three words ‘Ssabasajja Kabaka Awangale’ brings huge enthusiasm and energy to turn an impossible task into an easy task.

It is always a conundrum for me to understand if I miss them so much or they miss me so much!

Mrs Gosai was pleased to meet and encourage the students from Kyadondo and my son, Brij, was delighted to engage with the other Gombolola and Ssaza Chiefs

My special support goes to Milly Kalyabe who supported me at most meetings and did a lot of running around for the Gombolola work. She continued to translate to me until she was sure that I was able to understand Luganda myself. I will always remain grateful for the time and efforts she spent.

I am also very grateful for Maiam Sebagala who helped me with the translation and spent running around on Gombolola work. She was kind enough to represent me while I was in the UK.  Thank you, Mariam!

The Gombolola members are always grateful for the support and guidance received from the Kampala Central MP, Owek Muhammad Nsereko. His sister, Muky Fatuma Nsereko is an Executive Committee member of our Gombolola and also Kampala District Women Ward Councillor.

Evolution is the name of the game. The global modernisation has brought cultural values together! 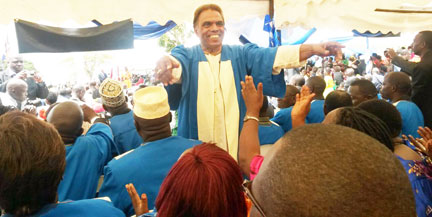 Yes, I admit – it was the dance that kept me going! 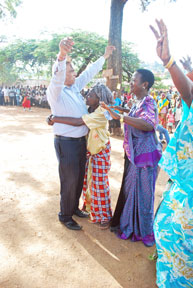 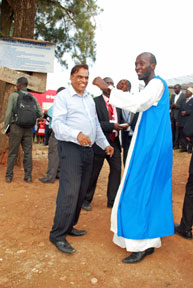 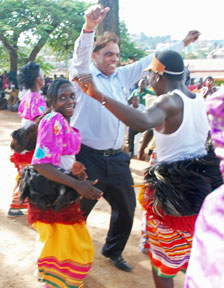 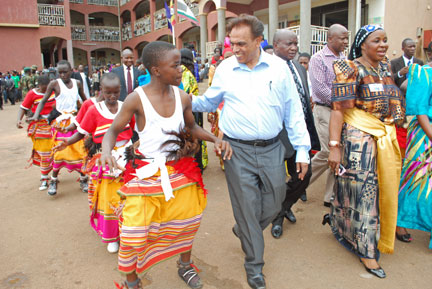 The Youngest & The Oldest Girl-Friends

At the Kabaka’s Palace event, the young lady was a very enthusiastic participant of the event on the invitation of Jaja Ndawula. She said she did not miss much of the events always supportive of good causes – a real inspiration for the young generation! 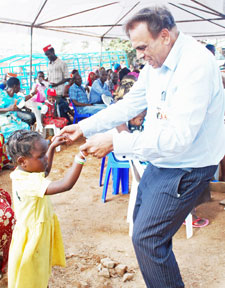 Maria me ta Kitrina is a dance love song by Nana Mouskouri on which I danced many times but never with a little beautiful girl as this one. She seriously followed the steps.

I asked her to repeat slowly ‘Ssabasajja Kabaka Awangale’ and she repeated it very easily!

A Wedding & A Baby

A Gombolola Member Karim invited us to join him for a wedding ceremony at Entebbe. I was able to witness a truly traditional wedding and was explained in the details of the ceremony involved.

A new Gombolola member – Baby Emmanuel – was handed to me. Earlier I had to rush the father to the hospital where his wife was due to deliver.

My blessings are with Baby Emmanuel and his parents!